All You Ever Wanted to Know About Insurance

Cyber Liability Insurance: A Smart Investment that Might Save Your Business

On April 20, 2011, someone hacked the Sony Playstation Network. They found an opening in the online video gaming network's password-reset system and penetrated the security protecting its customer database.

Days later, the company admitted that the hackers had obtained personal information on 70 million or more subscribers. The hackers got names, physical and email addresses, birthdates, and other identifying information, and it's possible that they got credit card numbers.

Sony took the network offline to reinforce it, but within days of it coming back online, hackers broke in again.

Playstation Network is a high-profile target with tens of millions of subscribers, making it attractive to criminals. However, even small businesses that do business over the Internet are vulnerable to the same kinds of intrusions.

What Could Happen to a Business's Data?

When consumers and business owners give their credit card numbers and other personal information to a business or organization, they expect that this information will stay confidential.

They will hold the organization responsible if they suffer financial harm because their information fell into the wrong hands. The organizations that lost the data face the potential for large jury awards or out-of-court settlements.

One insurance company advertises a cyber liability policy that provides coverage for expenses such as: 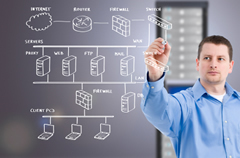 The majority of businesses and organizations operating today are vulnerable to unauthorized intrusions into their computer networks. The potential costs are more than most organizations can fund on their own. Cyber liability insurance is a smart investment that can literally save a company.

There are no comments yet.

Required fields are marked with ✶